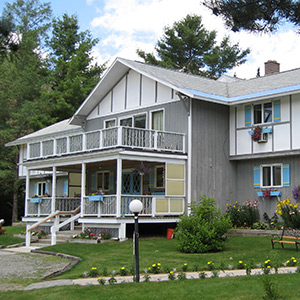 Carlson’s Lodge was designed and built by Carl Carlson himself with the help of his lovely wife Ruth. He was a carpenter by trade, and he was also a veteran of WWII. On March 6, 2011, at the age of 92, Mr. Carlson passed away with his family by his bedside. Up until then he remained hard at work around the Lodge taking care of the gardens, lawns, and building. The next February 16th Mrs. Carlson, at the age of 90, followed him. Though they are gone, we are left with beautiful memories and a wonderful place they built to call home.

Mr. Carlson was born in Rhode Island. After living multiple places across the United States and being overseas during the war, Mr. Carlson returned to Warwick, RI, where he spent many years building houses and spending time with his wife, Ruth Carlson, and his four daughters.

In the 60’s Mr. and Mrs. Carlson summered in Twin Mountain and operated Carlson’s Cabins until the 1970’s. In 1973, Mr. Carlson built the main building and the first guests arrived even before the carpet was laid. Fourteen years later, in 1987, the New Wing or the 200’s Wing was built offering larger rooms and kitchenette corner rooms as well as additional lobby space and another wood stove! (Notice that all rooms in the original building are 100’s while all the 200’s are the addition.) Though Mr. Carlson designed the building, he was not alone erecting the lodge. Mrs. Carlson played an essential role in building the lodge and the business.

Mrs. Carlson was the heart of the business, greeting guests from the day the cabins opened until her last days sitting on the porch taking in the mountain air. She always had a smile to give for adult or child as well as some good ol’ home remedy advice.

Currently, Carlson’s is still family run and now operated by Carol and Will. During a single visit you could meet any one of Mr. and Mrs. Carlson’s four daughters, four grandchildren, or three great-grandchildren.

We hope you enjoy your stay at Carlson’s and feel like part of the family.

Innkeepers made Twin Mountain a destination for travelers. The first visitors stayed with the Crawford family when Hannah and Abel Crawford turned their log cabin into an inn. Their son Ethan Allen Crawford became the most famous guide in the White Mountains. More visitors needed a place to stay, so Abel and Ethan built the Notch House in 1828. Twin Mountain, with its magnificent scenery, became a destination for visitors from all parts of the country.

When passenger trains came to the mountains, more grand hotels were built including the Twin Mountain House, the Crawford House, and in 1902 the Mount Washington Hotel. In the 1950’s the grand hotels began to be replaced by motor inns as the family car replaced train travel. The 1960’s brought winter sports to Twin Mountain as snowmobile trails were expanded into the forest. Bretton Woods ski area was opened the same year as our lodge and provided varying terrain for all types of skiers. In 1999, the Mount Washington opened for its first winter season.

This was our third stay at Carlson’s. Great, friendly people. Comfortable room after lots of wonderful hiking in the Whites!

We live under the shadow of Mount Washington which means our weather is often very different from what any forecast shows. We truly have New England weather that changes rapidly.