» Return to What's Going on at Carlson's 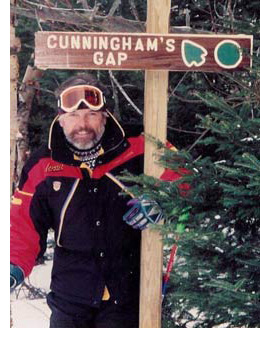 The 15th annual race and raffle honoring Bill’s memory was held on March 6, 2022.

Thanks to everyone who contributed to our 2022 race to make it a great day. An online race registration that includes sponsoring racers is on the website. Check it out and join us racing. If racing is not for you, raffle and silent auction prizes are an option. Please take a look and perhaps forward the information to others to help Carol, Cait, & Will and their family with this special event.

Help raise money and awareness for a rare disease that took the life of longtime ski instructor Bill Cunningham, who had a more than 30-year affiliation with Cannon Mountain as an instructor, director, assistant & technical director. Before New Hampshire’s parks department took over the ski school, Cunningham and his wife, Carol, were part owners of the then Franconia Ski School.

Bill Cunningham died on May 22, 2007, of a rare disease that causes proteins to deposit improperly into organs, leading to other diseases. And for Cunningham, the illness was misdiagnosed for several years, until it was too late. One of the reasons the event is being held Carol said, is to raise awareness about Amyloid, and to help spread the word so people who may have kidney and liver problems caused by the rare disorder can press to have further testing done. She said her husband’s initial testing rounds were negative and by the time the family found out he did suffer from Amyloid, it was too late.

This was our third stay at Carlson’s. Great, friendly people. Comfortable room after lots of wonderful hiking in the Whites!

We live under the shadow of Mount Washington which means our weather is often very different from what any forecast shows. We truly have New England weather that changes rapidly.